ZigBee and Wi-Fi channels both exist in the 2.4 GHz band, existing in the exact same frequency space. When deploying both Wi-Fi and ZigBee in the same environments, careful planning must be performed to make sure that they don't interfere with each other.
Operating a ZigBee network and a Wi-Fi network on the same frequency will cause them to interfere with each other. Usually, the ZigBee network will take the hit.

ZigBee and Wi-Fi channel numbers may seem similar, suggesting that they won't overlap. Unfortunately, this is not the case.

Wi-Fi's three non-overlapping channels (1, 6, and 11) use the exact same frequencies as ZigBee channels 11-22.

ZigBee channels 25-26 aren't immune either, because they can be caught in Wi-Fi channel 11's sideband lobe (see Sideband Lobes below). ZigBee channel 26 is usually relatively unaffected by Wi-Fi, but many ZigBee devices do not support it.

Chanalyzer + Wi-Spy allows you to visualize 2.4 GHz RF signals from both ZigBee and Wi-Fi, so you can plan a stable deployment. 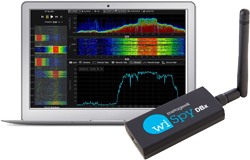 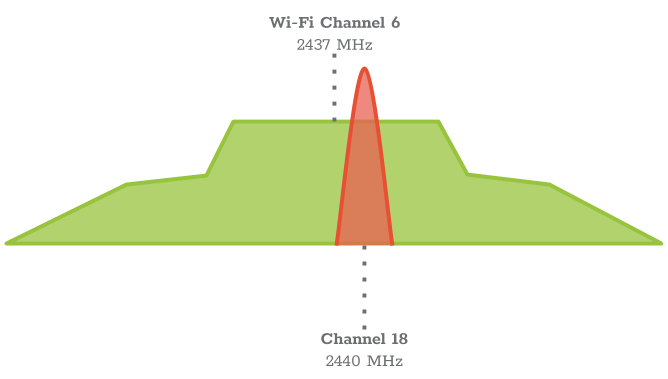 An 802.11g/n signature in the spectrum has two components: The 20 MHz "square" section that contains the data subcarriers Sideband lobes on each side, which are a normal side effects. Sideband lobes might not carry Wi-Fi data, but they are fully capable of drowning out ZigBee transmissions. 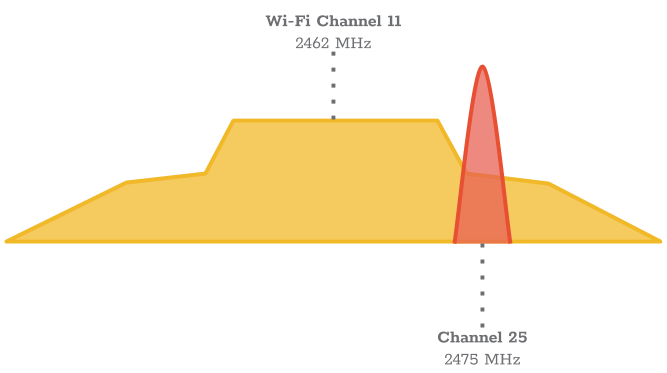 Sideband lobes are usually only visible when you are very close to to the device that is actively transmitting (try doing a speed test or streaming an HD video). This is especially evident when your ZigBee access point and Wi-Fi access point are in very close proximity with each other (like in the same comm closet).

When deploying ZigBee and Wi-Fi networks in the same environment, channel planning for peaceful coexistence is key.
Normally, we get three Wi-Fi channels to work with (utilizing 1, 6, and 11), but to make room for ZigBee, we may have give up channel 11.

When we deploy our AP's around the house, we'll want to keep the same-channel access points as far away from each other as possible to avoid co-channel interference. This essentially creates a two-channel reuse plan, which isn't as efficient as a three-channel reuse plan, but it will work to make space for the ZigBee gear.

This concept can be applied to just about any variation of two channels out of 1, 6, and 11. You could place Wi-Fi gear on channel 1 and 11, or 6 and 11, or any variant, as long as you're making room for the ZigBee gear and placing it on a good channel.

Most deployments have neighbors, and they typically run their own wireless networks, which have unpredictable channels. When you deploy your wireless network, use Chanalyzer + Wi-Spy to: