Ensuring Your Home WiFi is Ready for Work-from-Home

With so many people being asked or encouraged to work from home due to the Coronavirus (COVID-19), home WiFi has suddenly moved from nice-to-have to mission-critical. It's one thing when Netflix or Disney+ stops mid-show… but when you can't get video conferencing to work for an important meeting suddenly the WiFi in your home really matters. This article will walk you through simple steps to get your WiFi ready for the serious business of working from home. 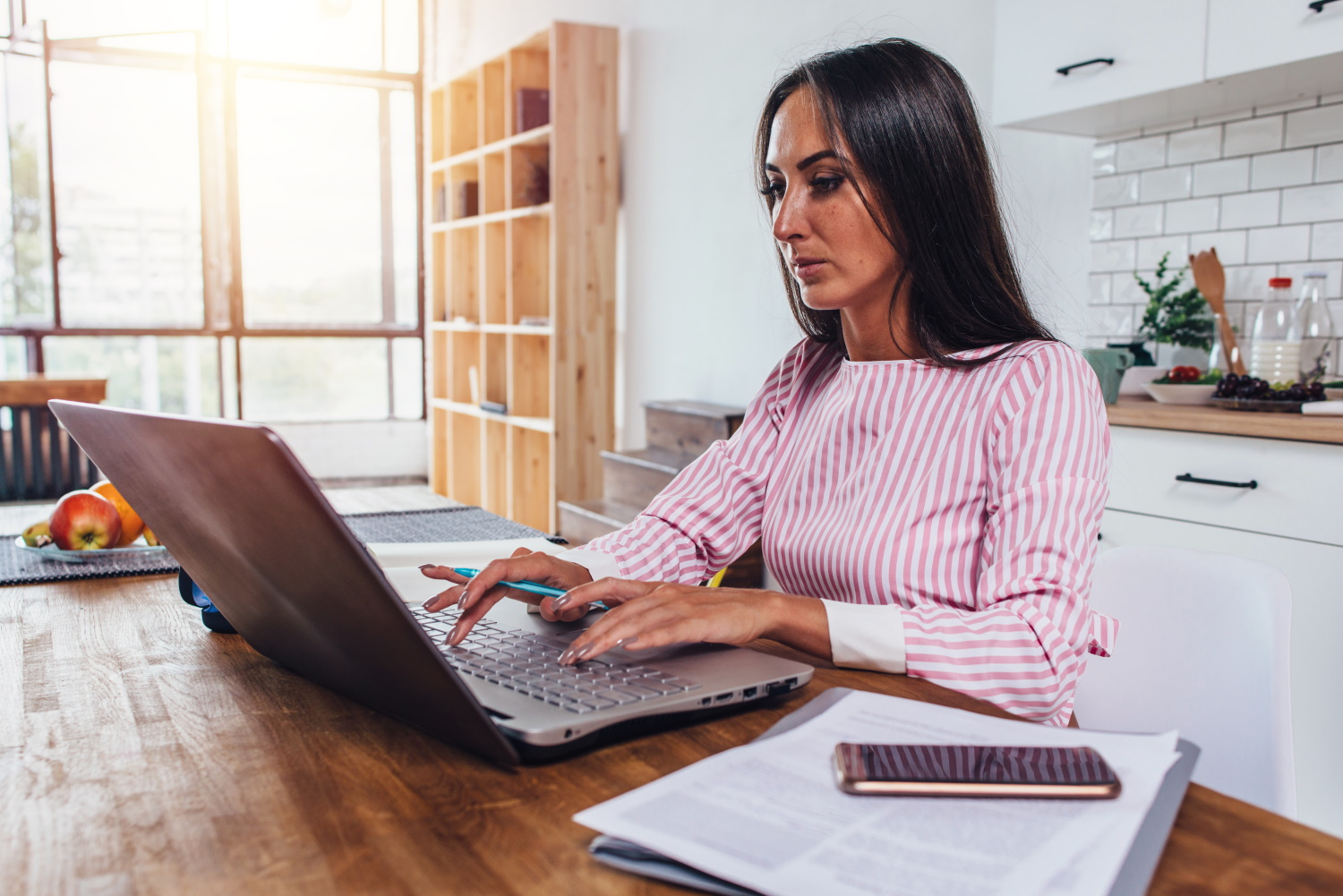 Once you have inSSIDer installed, sign in using the account you've just created. The first thing you'll see in inSSIDer is a big table listing all the WiFi networks in your environment.

If you are using WiFi to connect to the Internet your network should be highlighted in yellow and have a big yellow star next to it. 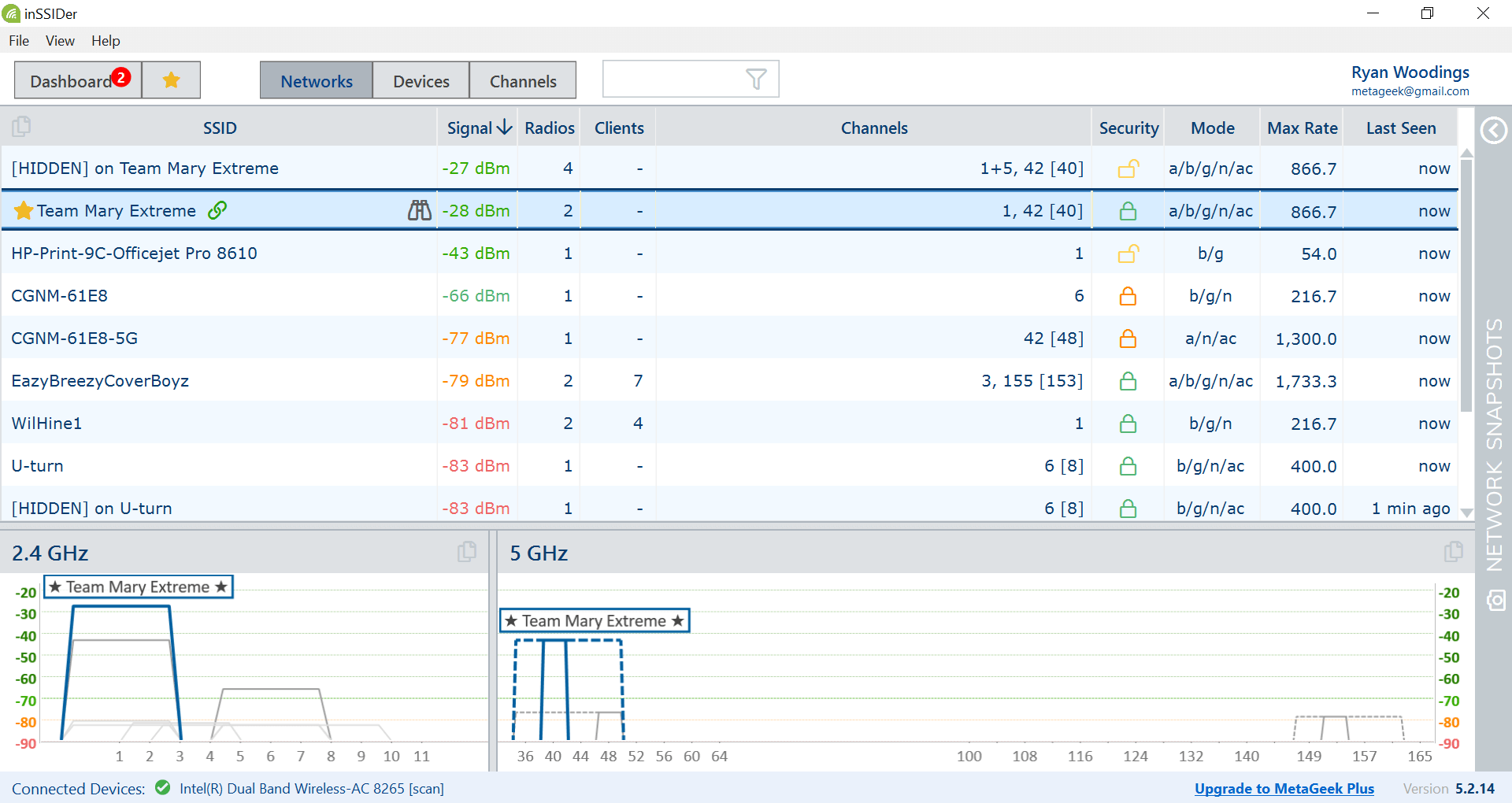 If your network isn't starred, click on the table column labeled "Signal" to sort the table by signal strength - this will put the strongest signals at the top of the table, which should be the WiFi access points closest to you. Select your network by clicking on its table row - it should now be highlighted in blue. Then click the binoculars icon to view details about your network. If you have more than one WiFi network name (SSID) that's great - this article will focus on one network at a time. 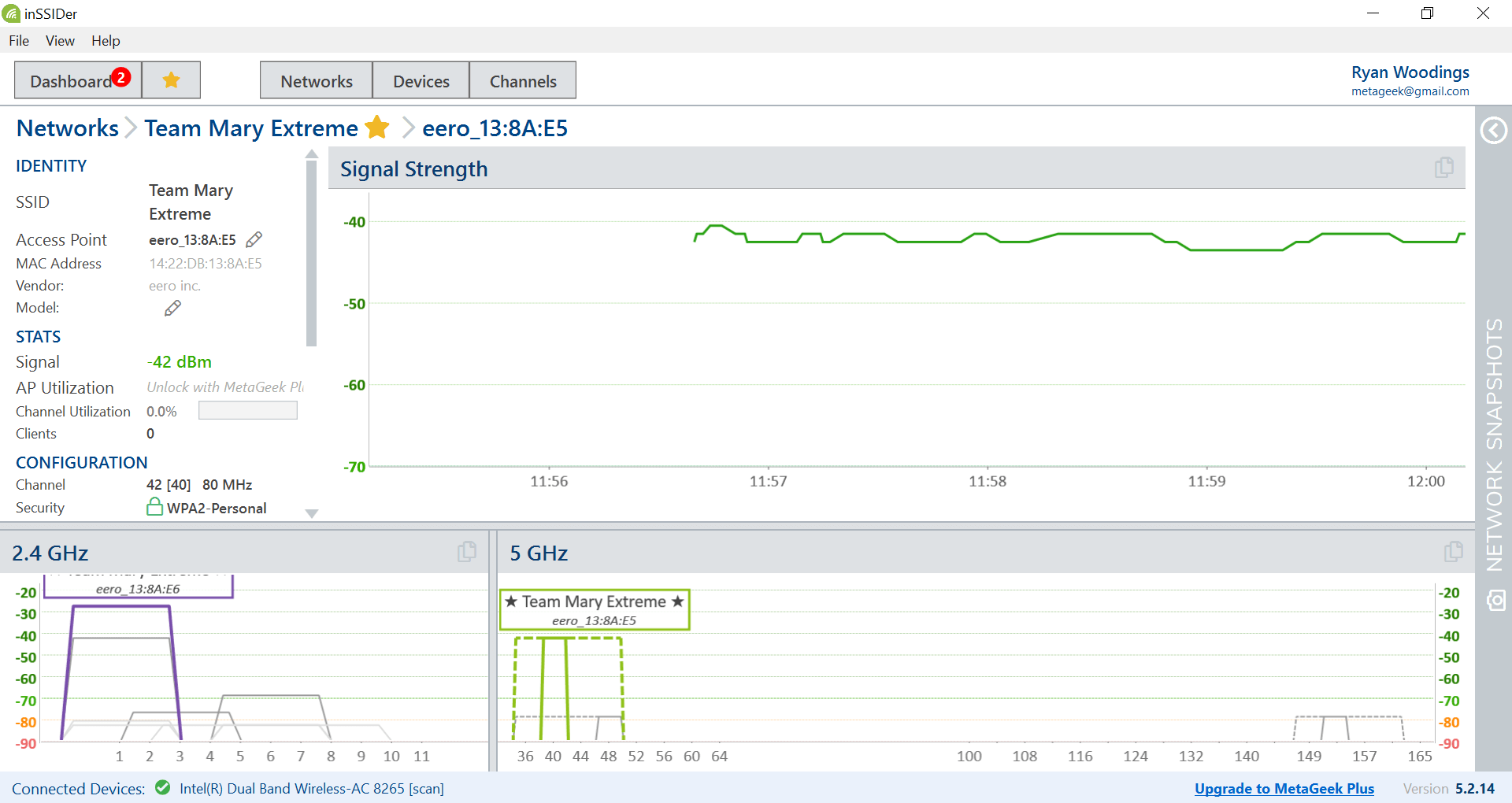 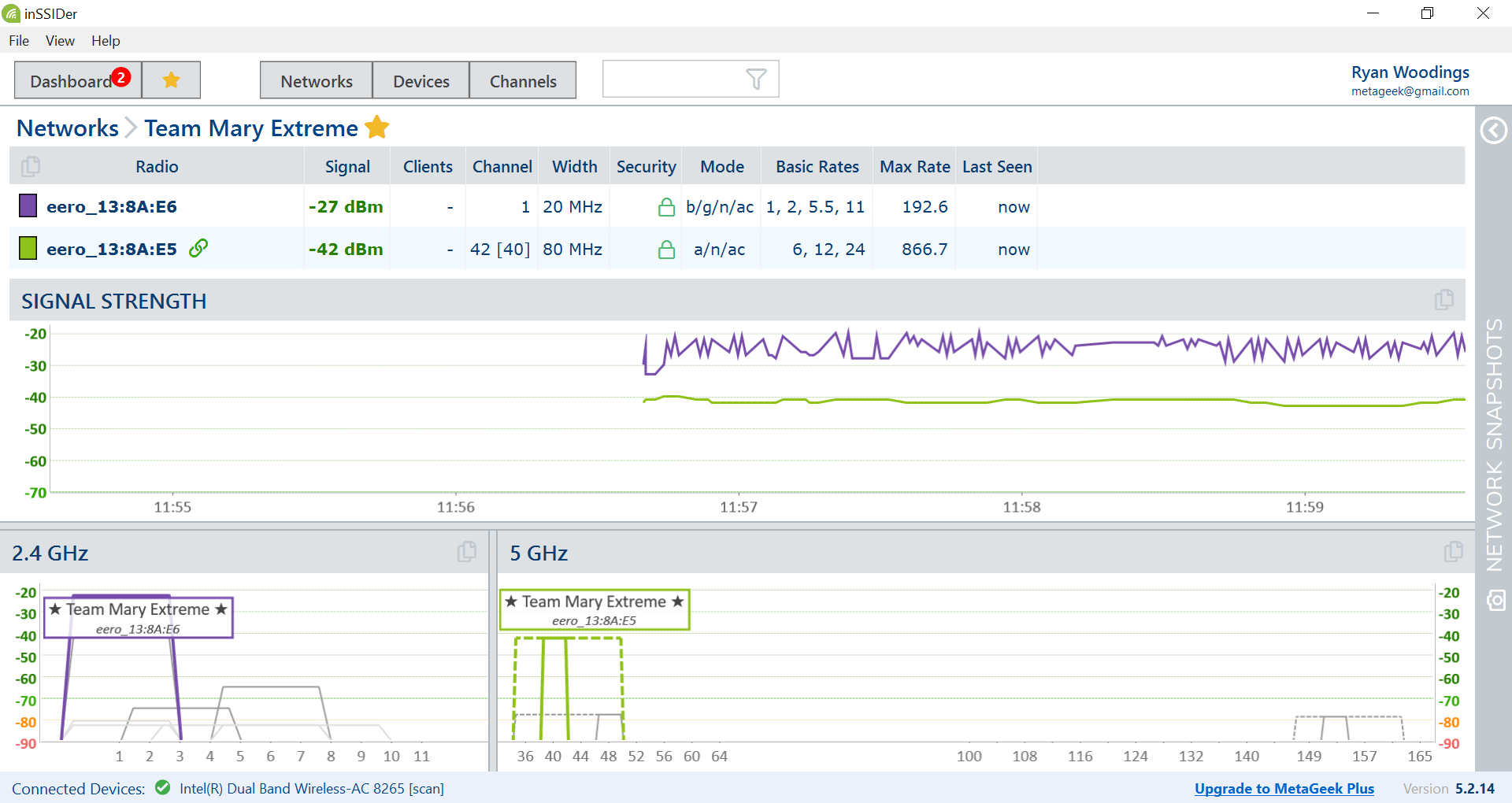 If inSSIDer looks like the screenshot on the right ( Multiple Access Point Radios) then you either have multiple access points or are using multiple bands. Click each row in the table and observe the highlighted shape in the bottom graphs. These shapes are showing the channel and signal strength of each access point radio. The gray shapes are other WiFi access points in your environment.

If your WiFi environment is like most WiFi environments you will notice a LOT of WiFi networks in the 2.4 GHz graph that overlap and are drawn on top of each other. In most places the 2.4 GHz band is really crowded, which is like being in a crowded bar with people talking loudly over the top of you - not a great place to get work done.

We encourage everyone to use 5 GHz if possible. Let's go back to the table and look at the Channel column - do you have a radio that is on channel 36 or higher? This is the 5 GHz band. If you don't have a 5 GHz access point it might be time to upgrade - this will have a bigger impact on your WiFi performance than anything else in this tutorial.

Setting up a 5 GHz Network 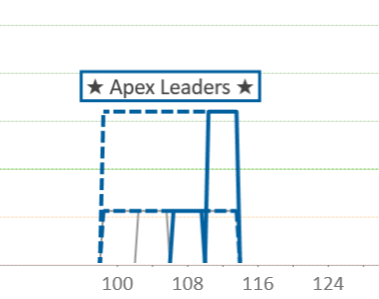 80 MHz Wide Channel without Loud Neighbors - This is Okay 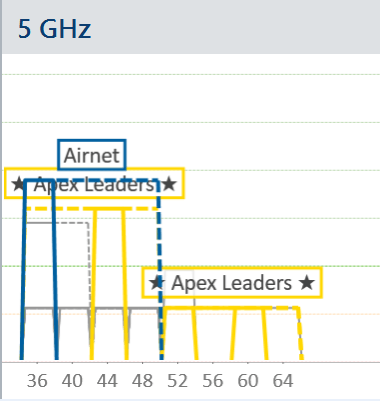 Setting up a 2.4 GHz Network

Usually the 2.4 GHz signal is slightly stronger than the 5 GHz signal, so most devices prefer to connect to 2.4 GHz if it's available. Remember, 2.4 GHz is the party band with all the loud talkers. By ONLY having 5 GHz access points on a network (SSID) you can force your devices to choose 5 GHz. Some older devices and most IoT devices only have 2.4 GHz radios, so connect those devices to the 2.4 GHz SSID (network name) and they will be happy, leaving your 5 GHz network available for you to get work done.

In 2.4 GHz the channels are numbered funny. WiFi networks need at least 20 MHz channel width, but channels are numbered every 5 MHz, which means that channel 1 overlaps with channels 2, 3, and 4. In the United States it is best practice to ONLY use channels 1, 6 and 11, because these channels don't overlap. In Europe, Asia, and other countries that have channels 12 and 13, it is best practice to use channels 1, 5, 9, and 13. Sometimes the U.S. practice of 1, 6, and 11 is used outside the United States, so if channels 12 and 13 are available in your country, use your best judgment as to which set of standard channels is being used in your WiFi environment - either 1,6, and 11 or 1, 5, 9, and 13. If you are using any other channel number (e.g. channel 2) then you should stop right now and change the channel to a standard channel. Go on, we'll wait for you. Overlapping channels is the biggest cause of poor performance in the 2.4 GHz band.

With your WiFi networks on good channels we will move on to the topic of security. Even if you are using a VPN for work, it's best to also have good security at the WiFi level. There have been a few iterations of WiFi Security starting with WEP and then WPA, WPA2 and now WPA3. WEP had serious flaws and is no longer used. WPA is also fairly old and has a number of known vulnerabilities, so we recommend using WPA2 or WPA3.

Any router purchased in the past few years should have WPA2 and new routers are shipping with WPA3. One thing to look for though is that some routers turn on WPA2 and WPA, which isn't as secure as just using WPA2. It's easy to figure out what security your access points are using by looking at the Security column in inSSIDer. If you see a green padlock you have at least WPA2. If you click the binoculars icon on each access point you can also drill down into the access point and then it will say "WPA2-Personal." There's also a WPA2-Enterprise version, which allows every user to have a different password; your office WiFi probably uses WPA2-Enterprise or WPA3-Enterprise. 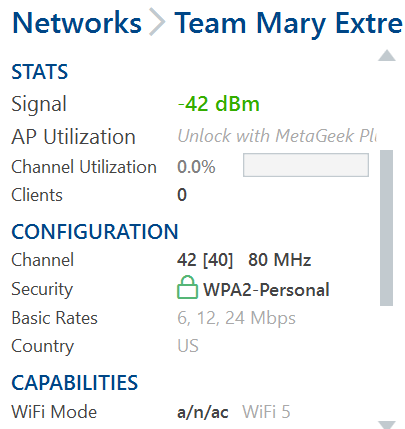 If your access point is using WEP or WPA, go into the security settings and look for options to ONLY use WPA2 or WPA3. If WPA2 or higher is not available it's time to upgrade your WiFi access point.

Congratulations! Your WiFi is on its way to being ready for you to work from home. In Part 2 we will check signal strength and data rate in the areas of your home where WiFi is used the most.