What is RSSI and what does it mean for a WiFi network?

RSSI, or “Received Signal Strength Indicator,” is a measurement of how well your device can hear a signal from an access point or router. It’s a value that is useful for determining if you have enough signal to get a good wireless connection.

Note: Because an RSSI value is pulled from the client device’s WiFi card (hence “received” signal strength), it is not the same as transmit power from a router or AP.

The Basics: Why is my WiFi so slow and how do I fix it?

With the spread of COVID-19 throughout the world we've put together tutorials and tools to ensure your home WiFi is ready for your next important video conference or work project.

dBm and RSSI are different units of measurement that both represent the same thing: signal strength. The difference is that RSSI is a relative index, while dBm is an absolute number representing power levels in mW (milliwatts).

RSSI is a term used to measure the relative quality of a received signal to a client device, but has no absolute value. The IEEE 802.11 standard (a big book of documentation for manufacturing WiFi equipment) specifies that RSSI can be on a scale of 0 to up to 255 and that each chipset manufacturer can define their own “RSSI_Max” value. Cisco, for example, uses a 0-100 scale, while Atheros uses 0-60. It’s all up to the manufacturer (which is why RSSI is a relative index), but you can infer that the higher the RSSI value is, the better the signal is.

Since RSSI varies greatly between chipset manufacturers, MetaGeek software uses a more standardized, absolute measure of signal strength: received signal power, which is measured in decibels, or dBm on a logarithmic scale. There’s a lot of math we could get into, but basically, the closer to 0 dBm, the better the signal is.

The Networks Table visualizes where selected networks are located on the 2.4 or 5 GHz band in relation to other networks, and the signal strengths of each. 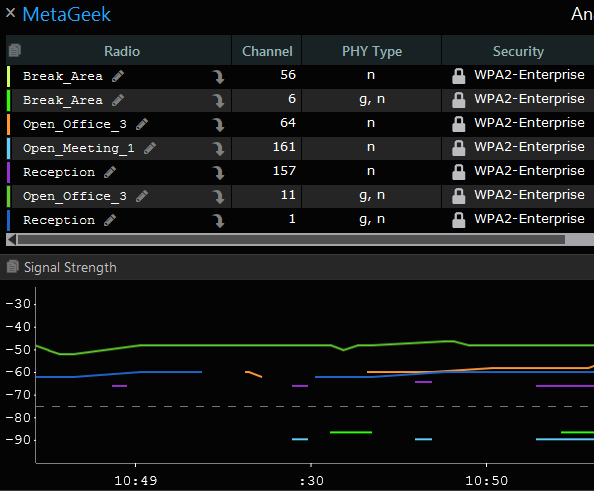 The Signal Strength Over Time graph shows how your network’s signal strengths changes as you move around the room or office.

What if I have an acceptable signal strength but I’m still having problems?

If you’ve already checked your signal strength using a WiFi scanning app like inSSIDer and concluded that you have acceptable WiFi signal strength, then interference may be to blame. Your computer’s WiFi adapter can help you see some types of interference, but for finding non-WiFi interferers, you’ll need a spectrum analysis tool like Wi-Spy.


Next Lesson...
New Router with DSL

The signal strength of the “MetaGeek” SSID is great (approx. -50dBm), but the actual wireless signal is being destroyed by a non-WiFi interferer, which is shown above with a large green spiky shape between channels 5 and 6.